Americans Seek Up to 7,000 Extra NATO Troops for Ramp-Up in Afghanistan

By PETER SPIEGEL and STEPHEN FIDLER

WASHINGTON -- The Obama administration is in advanced talks with its North Atlantic Treaty Organization allies for a coordinated rollout of a new Afghan war strategy, which U.S. officials hope will include a commitment by European allies to send several thousand additional troops.

U.S. and European estimates of the new troops they may get from NATO allies vary from 3,000 to 7,000. Those would complement the additional U.S. forces Mr. Obama is considering; those options range from 10,000 to 40,000, but U.S. officials have said a combination of combat troops and training forces totaling 35,000 has gained the most momentum. 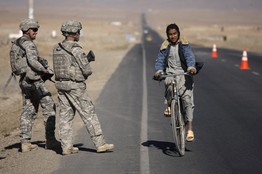 ROAD AHEAD: Soldiers at an Afghan checkpoint. The White House and NATO are in talks for a coordinated rollout of a new strategy. As few as 3,000 new troops from allies would be a significant diplomatic coup for the U.S. 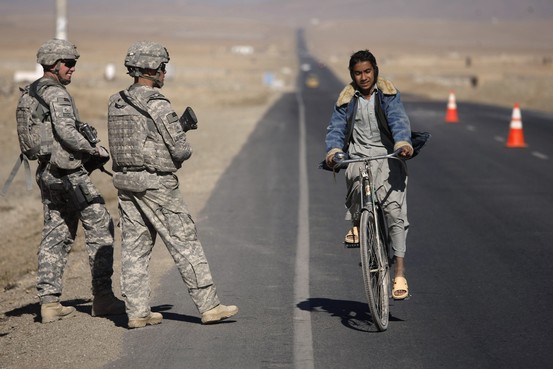 Arrangements haven't been finalized, but coordinated announcements of new troops could come as soon as the week of Nov. 30. They are likely to include an address by the NATO secretary general, Anders Fogh Rasmussen, shortly after President Barack Obama unveils his strategy.

According to officials familiar with the talks, Mr. Rasmussen would attempt to send a clear signal that the U.S. isn't alone in its plans to confront the Taliban. Officials said that Mr. Obama's review of Afghan strategy and U.S. troop levels, which some had thought would be completed last month, was extended in part to solidify NATO support.

NATO foreign ministers are scheduled to meet in Brussels starting Dec. 3, and European diplomats said they expect Mr. Obama to make his announcement ahead of the meeting.

U.S. and coalition casualties in Afghanistan 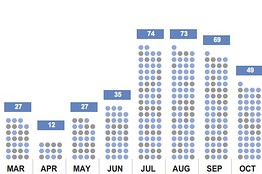 A commitment of as few as 3,000 new troops from allies could be a significant diplomatic coup for the White House, given the largely fruitless efforts by the Bush administration to get new large-scale commitments from NATO in the waning months of its tenure. The U.S. has 68,000 troops in Afghanistan; other allies have 36,000.

Mr. Rasmussen "has already begun an intensive series of consultations with European allies," said NATO spokesman James Appathurai. "He believes it is very important that we maintain a fair balance of burdens in this mission, and that includes in the context of any (troop) increase the U.S. may announce."

U.S. officials' estimates of foreign troop increases are mostly targets at this point, and include some that already have been publicly announced or signaled by governments.

According to people briefed on U.S. plans, the Obama administration is targeting six European allies to contribute battalion-sized units, generally about 500 to 1,000 troops. Officials say they are most hopeful they can get commitments from Germany, Italy and the United Kingdom.

Italy, which has 2,800 troops in Afghanistan, has signaled it would be willing to keep deployed the 400 added soldiers it sent as part of stepped-up security surrounding the August Afghan elections. An Italian official declined to comment. U.K. Prime Minister Gordon Brown likewise has signaled intention to send 500 more troops, and Turkey has recently announced it is doubling its current complement from 800 to 1,600.

Both Germany and the United Kingdom could find it politically difficult to commit more troops -- at least in the coming weeks.

According to current and former U.S. officials, senior officials in the government of German Chancellor Angela Merkel have signaled a willingness to press Germany's parliament to raise its troop ceiling to as much as 7,000 from 4,500. But it appears unlikely Germany would be able make a commitment in time for the rollout of the new strategy. A German government spokesman said Wednesday that Berlin will review its Afghan commitments early next year; officials declined to comment on the 7,000 figure.

Mr. Brown has been under intense criticism at home over his handling of the war, including lack of adequate equipment to support troops. Some senior U.S. officials have estimated the U.K. still may be able to commit as many as 2,000 more troops over the coming year, thanks to Britain's withdrawal from Iraq. A spokesman for Mr. Brown said the U.K. "keeps troop numbers in constant review," but that plans for troops have not changed.

Britain's opposition Conservative Party, favored to win an election to be called before June, has also said it would consider an increase of 2,000 troops, though the party's defense spokesman said any new troops would be for training Afghans.

U.S. and European officials acknowledged the Obama administration's relations with NATO allies have become strained over Afghan policy during the White House's three-month review of war strategy, with allies irritated they were not getting enough insight into U.S. plans.

"They're in a much better place today than they were three weeks ago with NATO," said a former senior U.S. official who has discussed Afghan policy with both sides. "The tenor of the conversations has changed."

The U.S. is targeting some other countries for major new contributions, but with less optimism. One, France, has already said it will not send more troops, but some senior U.S. officials hope a reduction in French forces in Kosovo could still open the door for as many as 1,000 new troops in Afghanistan. A French official did not respond to a request for comment.

Turkey -- which took command of NATO forces in Kabul on Nov. 1 -- and Romania are being targeted for added contributions of 600 troops each, according to U.S. officials. A Turkish official said his government has made no additional decision on troop levels, and a Romanian official didn't respond to a request for comment.

—Marcus Walker and Alistair MacDonald contributed to this article

Write to Peter Spiegel at peter.spiegel@wsj.com and Stephen Fidler at stephen.fidler@wsj.com

Printed in The Wall Street Journal, page A1

This copy is for your personal, non-commercial use only. Distribution and use of this material are governed by our Subscriber Agreement and by copyright law. For non-personal use or to order multiple copies, please contact Dow Jones Reprints at 1-800-843-0008 or visit

The latest news and analysis delivered to your in-box. Check the boxes below to sign up.

Thank you !
You will receive in your inbox.

The latest news and analysis delivered to your in-box. Check the boxes below to sign up.

Thank you !
You will receive in your inbox.

Your question to the Journal Community Your comments on articles will show your real name and not a username.Why?

Why use your real name? The Journal Community encourages thoughtful dialogue and meaningful connections between real people. We require the use of your full name to authenticate your identity. The quality of conversations can deteriorate when real identities are not provided.

If you feel you have reached this status change in error, please contact TBD@wsj.com

Please log in or register for free to use Save This.