Iran's Foreign Minister Mohammad Javad Zarif has been tweeting at @JZarif for just a couple of days, and he's already causing a bit of a stir.

Yesterday Zarif tweeted a new year message to Jews around the world:

Thanks. The New Year would be even sweeter if you would end Iran's Holocaust denial, sir. “@JZarif: Happy Rosh Hashanah”

Pelosi is likely referring to comments by former Iranian President Mahmoud Ahmadinejad , who was frequently believed to have denied the Holocaust. For example, in 2005 Ahmadinejad appeared on live TV and reportedly said:

"If somebody in their country questions God, nobody says anything, but if somebody denies the myth of the massacre of Jews, the Zionist loudspeakers and the governments in the pay of Zionism will start to scream."

What happened next in the exchange is what's really remarkable. You can see it in this screen-grab which Pelosi tweeted: 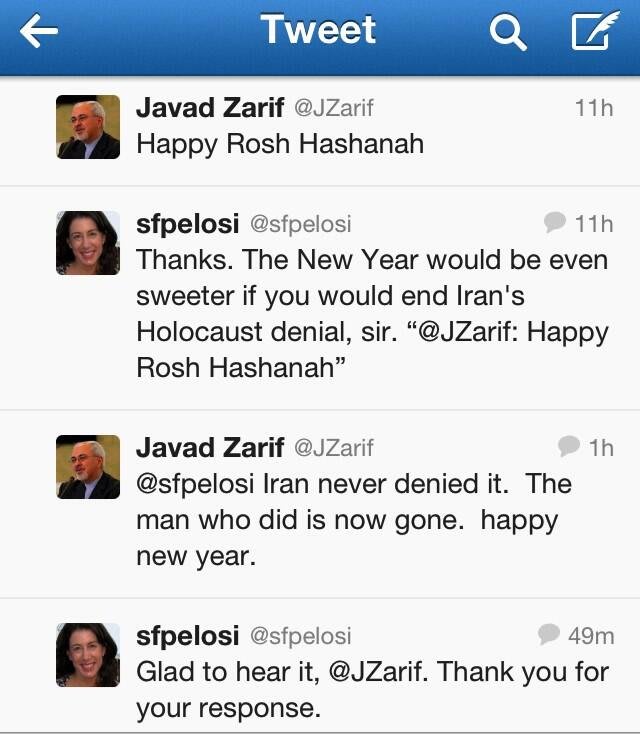 Yes, in this tweet Zarif appears to specifically say not only that Iran never denied it, but that Ahmadinejad did deny it.

That tweet was then deleted and replaced with a less strongly worded version:

@sfpelosi Iran never denied it. The man who was perceived to be denying it is now gone. Happy New Year.

It's a remarkable exchange, and one that — perhaps unwisely — people will try and read a lot into. When a Twitter account linked to Iran's new President Hassan Rouhani tweeted a Rosh Hashanah message earlier this week, Iranian officials rushed to deny any formal link between the President and the account.

According to ABC's Christiane Amanpour , however, this does appear to be Zarif's real account:

Just spoke with Iranian FM @JZarif - who confirms he IS tweeting and wishes Jews in Iran & around the world a happy new year! -- Ditto!

Iran's FM told me his country has never denied Holocaust and the man "perceived to be denying it" [Ahmadinejad] is now gone. Happy New Year

More
Post a comment
Top contributor with high quality and engaging posts in the last 14 days.
Learn more about this badge

YOU ON YAHOO! FINANCE

YOU ON YAHOO! FINANCE