Blog:Michael Bauer: Between Meals: 51941 : Do I get paid for blogging?
advertisement | your ad here

Home of the San Francisco Chronicle

Miriam Morgan 2009 Working on today's blog On my blog Tuesday, several posters got into a discussion about my compensation for blogging. Other commenters also seemed confused about the difference between...
Do I get paid for blogging?

Do I get paid for blogging? 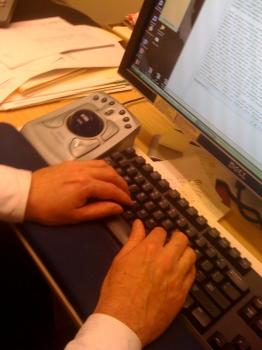 On my blog Tuesday, several posters got into a discussion about my compensation for blogging. Other commenters also seemed confused about the difference between what I write in the newspaper and what appears on the blog. One person defended what I do; another said:

"I have to respectfully disagree. Writing this blog is clearly part of Bauer's job, for which he gets paid. Do you think Bauer would be writing these posts, gratis, for The Chronicle if he was not employed by them?"

Only Bauer can answer that. I suspect he'd be blogging even if he weren't employed by The Chronicle, although the blog would, of course, be appearing elsewhere. From what I gather, The Chronicle sets some loose guidelines for their bloggers and then leaves them to decide their topics and frequency. I guess one factor would be, did Bauer get a pay raise for writing the blog? On a more general note, we are in a phase where the rules and media are changing. This understandably confuses people as they try to fit new cyber forms into old print boxes. Complaining that a blog item is not news-worthy, shouldn't be in a position of prominence on the SFGate homepage, or that it proves the decline of the newspaper etc. demonstrate this confusion.

This poster got it exactly right. Like others who are multi-tasking these days, I didn't get a raise when I started the blog. All of us in newspapers are doing tasks we never thought we'd do a decade ago before blogs and Twitter. We're reinventing what we do every day. I was at the Association of Food Journalists conference in New Orleans last month and, across the board, my colleagues are doing about twice as much work as they once did, juggling newsprint, video and Internet chores. It's been an interesting and challenging ride as we try to straddle the different mediums. It's more work, but it's also more fun.

As for my blog, the topics and frequency are left up to me. I decided to write daily — at first it was seven days a week, but I quickly cut back to five. After more than three years, it's now "part of my job."

However, what appears in the newspaper and what I do on the blog are different. Online, I try to keep the topics manageable and explore only one idea. If the story becomes more complicated, that would become a story in The Chronicle. How my Between Meals posts are played on the home page is the decision of the SFGate editors.

The blog, while an extension of what I do, has also developed a life of its own. The newspaper and online components complement each other, but in my mind they are very different.