In association with
Advertisement 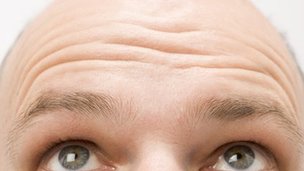 A biological clue to male baldness has been discovered, raising the prospect of a treatment to stop or even reverse thinning hair.

In studies of bald men and laboratory mice, US scientists pinpointed a protein that triggers hair loss.

Drugs that target the pathway are already in development, they report in the journal Science Translational Medicine.

The research could lead to a cream to treat baldness.

Most men start to go bald in middle age, with about 80% of men having some hair loss by the age of 70.

The male sex hormone testosterone plays a key role, as do genetic factors. They cause the hair follicles to shrink, eventually becoming so small that they are invisible, leading to the appearance of baldness.

Now, researchers at the University of Pennsylvania have analysed which genes are switched on when men start to go bald.

They found levels of a key protein called prostaglandin D synthase are elevated in the cells of hair follicles located in bald patches on the scalp, but not in hairy areas.

Mice bred to have high levels of the protein went completely bald, while transplanted human hairs stopped growing when given the protein.

Prof George Cotsarelis, of the department of dermatology, who led the research, said: "Essentially we showed that prostaglandin protein was elevated in the bald scalp of men and that it inhibited hair growth. So we identified a target for treating male-pattern baldness.

"The next step would be to screen for compounds that affect this receptor and to also find out whether blocking that receptor would reverse balding or just prevent balding - a question that would take a while to figure out."

The inhibition of hair growth is triggered when the protein binds to a receptor on the cells of hair follicles, said Prof Cotsarelis.

Several known drugs that target this pathway have already been identified, he added, including some that are in clinical trials.

The researchers say there is potential for developing a treatment that can be applied to the scalp to prevent baldness and possibly help hair regrow.

More on This Story

From other news sites

Debunking myths of the baby bump

Could dangling a wedding ring over the belly really tell the sex of the baby? Read more...
Advertising Partners

BBC © 2012 The BBC is not responsible for the content of external sites. Read more.

End of panel. Back to top of panelClose Panel

Read more about these links.

Close
End of panel. Back to top of panelClose Panel