Dermatomyositis (DM) is an idiopathic inflammatory myopathy (IIM) with characteristic cutaneous findings. Dermatomyositis is a systemic disorder that frequently affects the joints, the esophagus, the lungs, and, less commonly, the heart.1,2

In 1975, Bohan and Peter3 first suggested a set of criteria to aid in diagnosing and classifying dermatomyositis and polymyositis (PM). Of the 5 criteria, 4 relate to the muscle disease; these include progressive proximal symmetrical weakness, elevated muscle enzyme levels, abnormal findings on electromyograms, and abnormal findings from muscle biopsy. The fifth criterion is compatible cutaneous disease.

Patients exist in whom myositis resolves following therapy but whose skin disease remains as an active, important feature of the disease. These patients are not classified as having amyopathic dermatomyositis, despite the fact that, at this point in time, the skin is the major and often only manifestation of the disease. Sontheimer9 has suggested the term postmyopathic dermatomyositis for these patients.

Rare cutaneous manifestations include vesiculobullous, erosive lesions, and an exfoliative erythroderma. Biopsy samples from patients reveal an interface dermatitis similar to that of biopsy samples of heliotrope rash, Gottron papules, poikiloderma, or scalp lesions. These cutaneous manifestations may be more common in patients with an associated malignancy than in those without a malignancy.

Studies of the pathogenesis of the myopathy have demonstrated that the myopathy in dermatomyositis and polymyositis are pathogenetically different.10 Dermatomyositis-associated myopathy appears to be due to vascular inflammation. The pathogenesis of the cutaneous disease is poorly understood, but it is believed that similarities exist with that of cutaneous lupus erythematosus, in which T-cells are involved and antibody-mediated cell cytotoxicity plays a role.

The estimated incidence of dermatomyositis/polymyositis is 5.5 cases per million population. However, the incidence appears to be increasing.

Dermatomyositis may cause death because of muscle weakness or cardiopulmonary involvement. Patients with an associated cancer may die from the malignancy. Most patients with dermatomyositis survive, in which case they may develop residual weakness and disability. In children with severe disease, contractures can develop if they do not receive physical therapy. Calcinosis may be a complication, particularly in children.

Whites are more frequently affected. However, the rise in the incidence in African Americans is greater than that in whites.

Women are affected twice as often as men.

Dermatomyositis can occur in persons of any age, but the most common age at onset is in the fifth and sixth decades of life. 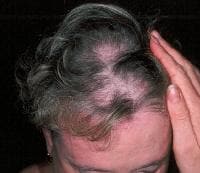 A diffuse alopecia with a scaly scalp dermatosis is common in dermatomyositis. 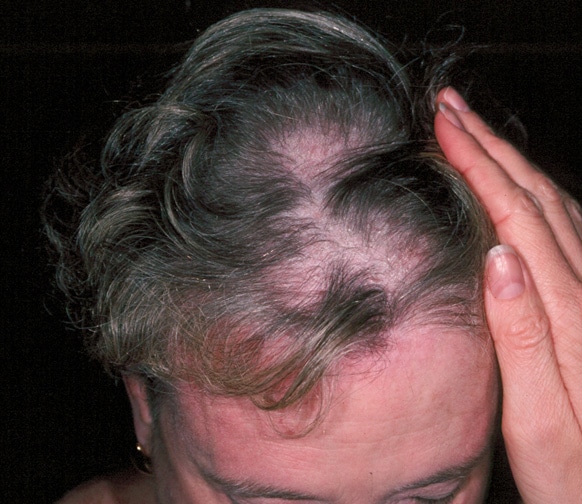 A diffuse alopecia with a scaly scalp dermatosis is common in dermatomyositis.

Dermatomyositis is a disease that primarily affects the skin and the muscles, but it might also affect other organ systems. 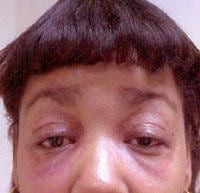 Heliotrope rash in a woman with dermatomyositis. 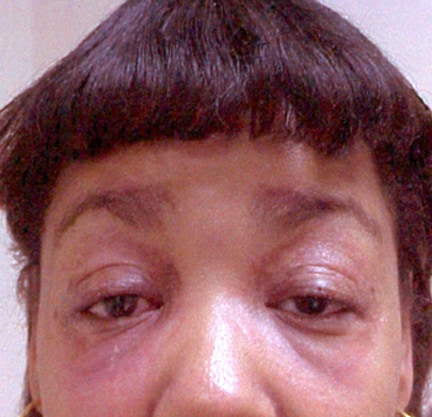 Heliotrope rash in a woman with dermatomyositis.

Gottron papules and nail fold telangiectasia are present in this patient. 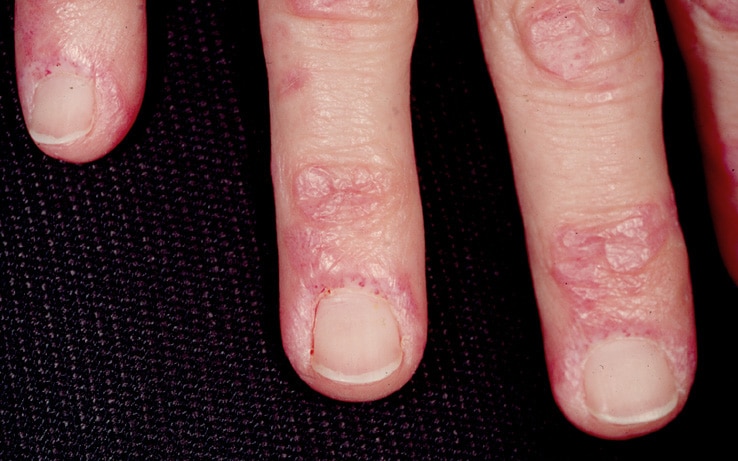 Gottron papules and nail fold telangiectasia are present in this patient.

Dermatomyositis is often associated with a poikiloderma in a photodistribution. 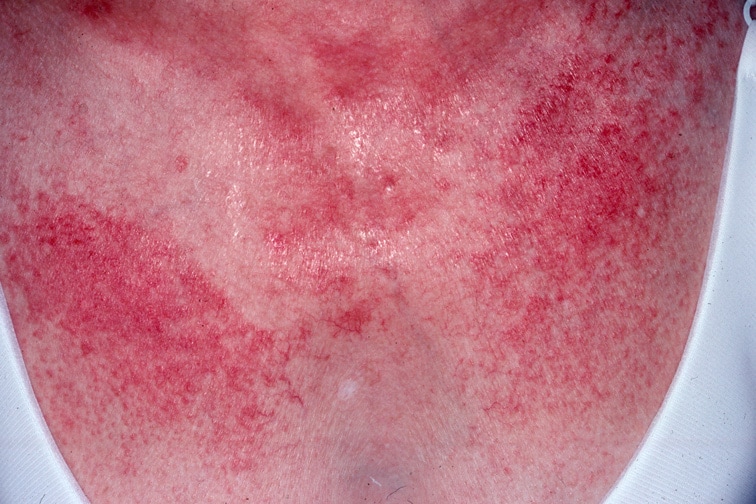 Dermatomyositis is often associated with a poikiloderma in a photodistribution. 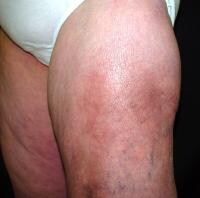 Calcifying panniculitis in a patient with dermatomyositis.

Calcifying panniculitis in a patient with dermatomyositis.

All material on this website is protected by copyright, Copyright© 1994- by Medscape.
This website also contains material copyrighted by 3rd parties.

DISCLAIMER: The content of this Website is not influenced by sponsors. The site is designed primarily for use by qualified physicians and other medical professionals. The information contained herein should NOT be used as a substitute for the advice of an appropriately qualified and licensed physician or other health care provider. The information provided here is for educational and informational purposes only. In no way should it be considered as offering medical advice. Please check with a physician if you suspect you are ill.