By Aaron Pressman | The Exchange – 59 minutes ago

Motorola has produced little more than losses and restructuring charges since Google (GOOG) acquired it for $12.5 billion last year. But the company’s new Moto X is getting good buzz and could put the phone maker back in the black. 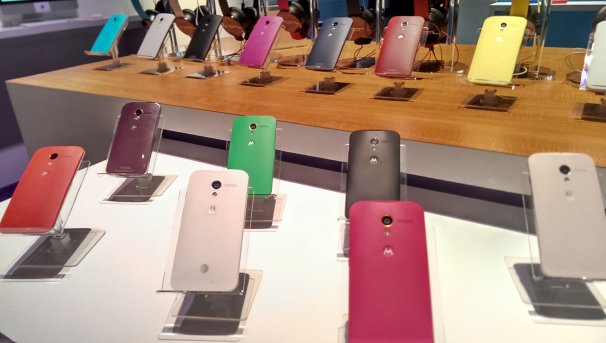 Google won’t have to move iPhone-levels of product to turn things around, either. Motorola could show a significant profit on annual sales of just 5 million to 7 million of the Moto X phone, which will be available on all five major U.S. carriers in coming weeks, analysts say.

And even that modest level of sales, a fraction of the 44 million U.S. iPhones and 53 million Samsung (005930.KS) Galaxies sold in the U.S. last year, could double or triple Moto’s U.S. smartphone market share, according to market researcher Strategy Analytics.

Customers will pay $199 for the Moto X on a two-year contract, pretty typical subsidized pricing in the fat middle of the U.S. smartphone market. But one of the new phone’s top selling points – the customer-selectable 18 colors – will start as an AT&T (T) exclusive. It may not be a lengthy exclusive – Verizon (VZ) says its customers will start with just black or white models and get colors “later this year.”

Increasing odds of a successful launch

Getting the iPhone onto the menus of the five largest carriers took Apple until this year, when T-Mobile (TMUS) finally signed on. The Moto X’s broader initial distribution surprised some analysts and increased the odds of a successful launch.

“Motorola stands a good chance of upping their share in the second half of 2013, especially because there are more channels for the flagship device,” says Ken Hyers, senior analyst at Strategy Analytics.

Early Moto X reviews are positive. Tech blog TheVerge gave the Moto X a score of 8 out 10, slightly less than the iPhone 5’s 8.8 rating and the HTC One’s 8.3 rating. PC Magazine rated the Moto X four stars out of five, trailing the iPhone and HTC One by half a star.

Behind the scenes, mobile carriers are paying about $350 for the Moto X, which costs an estimated $214 to build, giving Motorola and Google an estimated gross profit margin of 39%, according to analysts at Goldman Sachs.

If Google can sell 6.6 million Moto Xs, about 0.5% of all smartphones sold globally, that would produce $2.3 billion of new revenue and add about $2.07 to earnings per share next year, the analysts say. Analysts on average were expecting Google to earn $22.31 per share in the second half of this year and $51.28 per share in 2014, according to FactSet.

But Google will also have to spend big on marketing to make the phone a success. At the high end of estimates, a $500 million marketing campaign would reduce the earnings-per-share increase to just 92 cents, Goldman analysts say.

Google could benefit in another way if the Moto X succeeds, however. There’s a second front in the smartphone profit wars – sales of mobile advertising. Google makes billions selling mobile ads on phones made by Samsung, HTC and even Apple. It has to share that revenue with device makers – as much as 80% with Apple, analysts estimate. And the share going to device makers is much higher than the share websites collect when visitors click on ads.

But on Motorola phones, there’s no sharing with another phone maker. Ad clicks from Moto X owners flow right into Google’s coffers.

Just how other carriers will react to the Moto X remains an unknown. Samsung has been making noise about switching some of its smartphones away from Android and to its homegrown Tizen operating system. But the threat seems fairly minor, given the lack of apps and other content available on Tizen. Even Microsoft, with its vast resources and huge pool of Windows developers, has made little headway trying to convince consumers to buy Windows 8 phones. Tizen’s ecosystem is even weaker.

Strong Moto X sales could increase Google’s negotiating power with other phone makers. But a weak showing could encourage rivals to seek an even higher share of mobile ad revenue.

Regardless of how many Moto X’s Motorola sells, the unit is not quite the $12.5 billion Android bet it’s sometimes made out to be by Google watchers. Google did pay $12.5 billion for the company. But Motorola had $3 billion of cash on hand and Google sold off its set-top box division last December for another $2.3 billion.

So it’s more accurate to say only $7 billion is riding on the Moto X. A billion here, a billion there and pretty soon you're talking about real money.

To keep up with all the latest tech industry news, follow Aaron Pressman on Twitter and Tumblr.

Your most recently viewed tickers will automatically show up here if you type a ticker in the "Enter symbol/company" at the bottom of this module.
You need to enable your browser cookies to view your most recent quotes.
Save List to Portfolio »
Sign-in to view quotes in your portfolios.

Should every American get help buying a home?

Roll over each section to subscribe using Add to My Yahoo! or RSS Feed feeds.

Should every American get help buying a home?