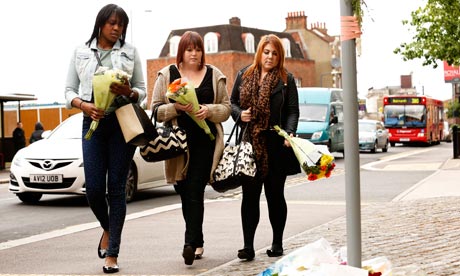 Women prepare to lay flowers near the scene of the killing of Lee Rigby. Photograph: Luke Macgregor/Reuters

Scotland Yard charged Michael Adebowale late on Wednesday night with the murder of Drummer Lee Rigby, who was hacked to death last week in broad daylight as he returned to his London barracks.

Adebowale, 22, was arrested at the scene in Woolwich after being shot by armed police, along with a second suspect.

The British government and police believe the attack on the 25-year-old soldier was motivated by the ideology of violent jihad.

Rigby's death was the first on British soil at the hands of terrorists driven by the al-Qaida ideology since the London bombings of 7 July 2005.

Adebowale, from Greenwich, south-east London, was released from hospital on Tuesday after doctors declared him fit to be interviewed. He was taken to a south London police station where detectives from Scotland Yard's counter-terrorism command began to question him.

They liaised closely with prosecutors about the evidence they had gathered. Detectives and prosecutors also discussed the result of the interviews with Adebowale.

Late on Wednesday, the Crown Prosecution Service announced it had authorised the bringing of criminal charges, meaning it believed the evidence could convince a jury beyond reasonable doubt of Adebowale's guilt. The CPS authorised the charging of Adebowale with the murder of Rigby.

A second suspect arrested at the scene, Michael Adebolajo, 28, remains in hospital after he was shot by officers, still too ill to be questioned by detectives.

Sue Hemming, head of the special crime and counter-terrorism division, said: "Crown prosecutors have been working with the investigators of counter-terrorism command since the killing of Drummer Lee Rigby on 22 May. Following the release of Michael Adebowale from hospital, we have authorised the police to charge him with the murder of Drummer Rigby.

"We have also authorised police to charge him with possession of a firearm, contrary to section 16A of the Firearms Act 1968. There is sufficient evidence to prosecute Michael Adebowale and it is in the public interest to do so."

He will appear at Westminster magistrates court today. The CPS said the weapon was a 9.4mm Dutch calibre KNIL Model 91 revolver.

Hemming added: "This man is now charged with serious criminal offences and he has the right to a fair trial. It is extremely important that nothing should be reported which could prejudice this trial."

The killing sparked intense media coverage, in part because of videos taken by witnesses on mobile phone cameras. Experts in interrogating terrorism suspects said they expected during interrogation the suspects to be played video footage showing the attack on the soldier, and the aftermath, and to be asked to comment.

The need to interview the suspects arises out of fairness to them and because it might strengthen any criminal case, and explains why police waited a week to start questioning when Adebowale was judged medically fit.

Earlier the police said a postmortem had established that Rigby died from "multiple incised wounds", indicating that he suffered slashing or hacking from the blade of a weapon as opposed to its point.

Detectives also appealed for witnesses who might have seen a blue car, used by the attackers to run Rigby down, in the minutes leading up to his death.

In a statement, the Met said: "Mr Rigby was walking to the Royal Artillery barracks in Artillery Place, near to the junction with John Wilson Street, SE18, when he was struck by a blue Vauxhall Tigra registration number N696 JWX. He was then attacked by two men." Police returned on Wednesday to the scene of the attack to find other witnesses, and the charity Victim Support said it had provided help for 11 witnesses traumatised by the attack.

Also on Wednesday the government's independent reviewer of terrorism legislation said it would be a mistake for the government to ban radical Islamists from appearing on TV. After criticism of the BBC for giving airtime to Anjem Choudary, a former member of the now banned al-Muhajiroun, the home secretary, Theresa May, had suggested banning such preachers from appearing on air.

But David Anderson QC said that if extremists were banned from TV, it would risk sanitising them.

He told BBC Radio 4's PM programme: "I'm a great believer in the marketplace of ideas, the good ideas drive out the bad."

He said people should be heard, or there was a risk that others "don't actually realise how extreme they are".

Police also said that firearms officers who fired at the suspects at Woolwich could be back on duty within days.

Chief Supt Alistair Sutherland said the three armed officers and two of their commanders were undergoing assessments. The Independent Police Complaints Commission has already said officers would not face criminal or disciplinary charges after police fired eight shots at the suspects.

Eight other people have been arrested in connection with Rigby's death.

Hayden Allen, 21, was arrested on Saturday on suspicion of conspiracy to commit murder but later released on bail.

Allen said he had "no prior knowledge" of the crime and played no part in the incident or its lead-up.

Our editors' picks for the day's top news and commentary delivered to your inbox each morning.

Get the Guardian's daily US email

Our editors' picks for the day's top news and commentary delivered to your inbox each morning. Enter your email address to subscribe.

Get the Guardian's daily Australia email

Our editors' picks for the day's top news and commentary delivered to your inbox every weekday.

Bestsellers from our Guardian stores

From the bright lights of Los Angeles to magnificent views across the Grand Canyon, the west coast and beyond is packed with sights and sounds that you’ll never forget. Enter a competition for a chance to experience the best of the USA

Find the latest jobs in your sector:

Top stories in this section

Send to a friend