Books of The Times 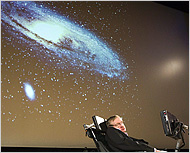 Stephen Hawking delivering a lecture on “The Creation of the Universe” in Geneva last year. 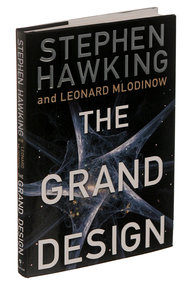 Mr. Hawking’s “Brief History of Time,” published in 1988, sold some nine million copies. (A typical science best seller will move a tiny fraction of that number.) It did so partly by leaning on his preoccupying personal story. Mr. Hawking’s body has been wasted by Lou Gehrig’s disease, while his mind is utterly intact, a pinging black box amid the physical wreckage. It was no accident that Mr. Hawking’s wheelchair and elfin face appeared on that book’s cover — a rarity for a book of serious intellect — rather than on its back flap.

In “A Brief History of Time” Mr. Hawking also dabbled in what the science writer Timothy Ferris has called “God-mongering.” Mr. Hawking, a longtime professor of mathematics at Cambridge University, has hardly displayed a religious bent during his long career. (A memoir by his former wife outed him as an atheist.) But he ended “Brief History” by declaring that the discovery of a unified theory of physics could help us to “know the mind of God.” It was a line that — cynically, some thought — allowed glints of fuzzy sunshine to warm the cold blade of his thinking.

Mr. Hawking’s new book, “The Grand Design,” published yesterday, has already made headlines and been a trending topic on Twitter, thanks to a different sort of God-mongering. This time Mr. Hawking has, we’re told, declared God pretty much dead.

His search for an answer to the question “How did the universe begin?” has led him to suggest that the creation of our universe and others simply “does not require the intervention of some supernatural being or god.” It’s another canny move. Books about the God wars are easier to argue about than those that parse the finer points of quantum physics. As I’m typing this, “The Grand Design” is the No. 1 book on Amazon, one spot above “Freedom,” the heavily hyped new Jonathan Franzen novel.

The real news about “The Grand Design,” however, isn’t Mr. Hawking’s supposed jettisoning of God, information that will surprise no one who has followed his work closely. The real news about “The Grand Design” is how disappointingly tinny and inelegant it is. The spare and earnest voice that Mr. Hawking employed with such appeal in “A Brief History of Time” has been replaced here by one that is alternately condescending, as if he were Mr. Rogers explaining rain clouds to toddlers, and impenetrable.

“The Grand Design” is packed with grating yuks. “If you think it is hard to get humans to follow traffic laws,” we read, “imagine convincing an asteroid to move along an ellipse.” (Oh, my.) This is the sort of book that introduces the legendary physicist Richard Feynman as “a colorful character who worked at the California Institute of Technology and played the bongo drums at a strip joint down the road.” Mr. Hawking has written “The Grand Design” with Leonard Mlodinow, a fellow physicist who has also worked on “Star Trek: The Next Generation.” They’re an awkward pair, part “A Beautiful Mind,” part Borscht Belt. This book is provocative pop science, an exploration of the latest thinking about the origins of our universe. But the air inside this literary biosphere is not especially pleasant to breathe.

At its core “The Grand Design” is an examination of a relatively new candidate for the “ultimate theory of everything,” something called M-theory, itself an extension of string theory, which tries to reconcile general relativity and quantum mechanics. “M-theory is not a theory in the usual sense,” the authors write. “It is a whole family of different theories.” According to M-theory, “ours is not the only universe,” the authors say. “Instead M-theory predicts that a great many universes were created out of nothing.” The image that comes to mind here, others have written about M-theory, is of a God blowing soap bubbles.

But Mr. Hawking and Mr. Mlodinow argue that “their creation does not require the intervention of some supernatural being or god. Rather, these multiple universes arise naturally from physical law. They are a prediction of science.” Many of these universes would be quite different from ours, they add, and “quite unsuitable for the existence of any form of life,” or at least any form of life remotely like ours.

M-theory, if it is confirmed, would be “the unifying theory Einstein was hoping to find,” the authors write. But it’s a somewhat disappointing theory, a patchwork quilt rather than a fine, seamless garment.

To approach their thinking about M-theory, Mr. Hawking and Mr. Mlodinow first stroll leisurely through the history of scientific thinking about the nature of our universe, from Pythagoras to Descartes, and from Heisenberg to Feynman. They are often good at working up crisp mental images. They write about a city in Italy that, a few years ago, barred pet owners from keeping goldfish in curved bowls. Why? Because it is cruel, the town argued, to give the fish “a distorted view of reality.”

We’re quite similar to those goldfish, the authors suggest. Our perceptions are limited and warped by the kind of lenses we see through, “the interpretive structure of our human brains.” Digging deeply into quantum physics, they assert that our universe “doesn’t have just a single history, but every possible history, each with its own probability.” We create history by observing it; it doesn’t create us. There’s plenty in “The Grand Design” that, if you are not a physicist or a mathematician, will sometimes hurt your head, especially the ideas about why time as we know it does not exist. As even Feynman once wrote, “I think I can safely say that nobody understands quantum physics.”

The arguments in “The Grand Design” — especially those about why God isn’t necessary to imagine the beginning of the universe — put me in mind of something Mr. Ferris said in his excellent book “The Whole Shebang” (1997).

“Religious systems are inherently conservative, science inherently progressive,” Mr. Ferris wrote. Religion and science don’t have to be hostile to each other, but we can stop setting them up on blind dates. “This may be an instance,” Mr. Ferris writes, “where good walls make good neighbors.”


The new issue of T is here


See the news in the making. Watch TimesCast, a daily news video.