U-571: You give historical films a bad name

This 2000 film about a US submarine crew's attempt to steal an Enigma machine from a German U-boat was so inaccurate that it was damned by the UK parliament as an affront to the real sailors. And to make matters worse, it stars Jon Bon Jovi 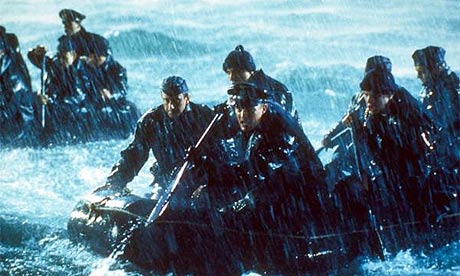 Enigma machines were used by the Nazis to encrypt secret messages before and during the second world war. Based on the work of a team of Polish mathematicians in 1932, and several captured machines and codebooks, the Enigma was broken at Bletchley Park on 1 June 1941. 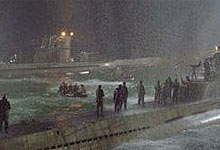 It's spring 1942, and an American submarine is making its way through the Atlantic. The target: a stricken German U-boat. Posing as a German supply crew, the American sailors plan to board the U-571 and steal its Enigma. Just a few problems here. First, the real submarine U-571 was never captured, though it was sunk by an Australian plane off Ireland in 1944. Second, by 1942, allied intelligence already had several Enigma machines. The first capture took place in February 1940, when the U-33 was taken by HMS Gleaner off the coast of Scotland. Three Enigma rotors were found, according to some sources, in a German sailor's trousers. Third, as eagle-eyed readers may already have noticed, the Enigma had actually been deciphered almost a year before this film is set – and seven months before the US entered the second world war.

The film seems to be based on the real story of Operation Primrose. On 8 May 1941, German submarine U-110 attacked an allied convoy that included the British ship HMS Bulldog. Damaged by depth charges, U-110 surfaced and was boarded by the Bulldog's crew, who collected all the papers they could find (no one spoke German, so they couldn't be selective), and an Enigma machine. Bletchley Park already had several Enigmas at this point. Bulldog's triumph was recovering the codebooks. 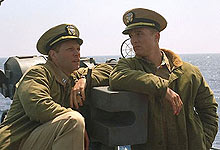 Chuckle brothers ... Jon Bon Jovi and Matthew McConaughey in U-571

A generally B-list and exclusively American cast is headed up by Matthew McConaughey, Bill Paxton and Harvey Keitel, with the tokenish addition of TC Carson as an African-American cook. After the German crew is taken prisoner, Carson jeers at them: "It's your first time looking at a black man, ain't it? Get used to it!" It's absolutely true that Nazi Germany persecuted black people. Whereas the United States in 1942, of course, was a model of racial equality, and ... oh. Never mind. Obviously, at some point during pre-production, someone asked the question: "But how can we make this film even more ridiculous?" Fortunately, the answer was readily to hand: cast poodle rocker Jon Bon Jovi as the chief engineer.

The men successfully swipe the Enigma machine, but soon find themselves pursued by a very angry German destroyer. Quickly, they realise they must get the Enigma machine to Britain, or die in the attempt. If they are captured by the Nazis, they will be tortured, and allied cryptography may be revealed. Or, as Lieutenant Bon Jovi might put it, "We've got to hold on to what we've got. It doesn't make a difference if we make it or not. Whoa, oh, living on a prayer."

Amid any number of explosions and deaths, the original scene in which Lieutenant Bon Jovi was decapitated by a bit of flying debris was cut. Instead, he is shot through the heart, and you're to blame. Baby, you give love a bad name. Sorry, that's not true. Actually, he falls over the side. But he does go out in a blaze of glory.

At the time of its release, Tony Blair condemned U-571 in parliament as an insult to the Royal Navy. A far more entertaining response would have been for Britain to fund a big-budget revenge epic, in which a small platoon of foppish yet plucky Brits swans over to Vietnam in 1968, defeats the Viet Cong, and wins the war. Moreover, it would be nearly as accurate as this. 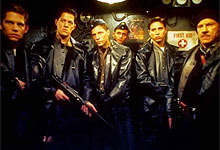 Real heroes, except they were supposed to be British and in action at least a year earlier

The director actually has the audacity to end on a title card dedicating his film to the memory of the real sailors who captured Enigma machines. Yes, that same memory he has just desecrated. This is exactly the most tasteless gesture the film-makers could have made.

The only honest thing about U-571 is its tagline: "Nine men are about to change history."

More from Reel history on

Latest news, reviews and links from the Guardian's film team

Compare and buy tickets for thousands of events

The latest art and design news, ideas and reviews, delivered to your inbox every Friday. The Art Weekly email offers in-depth coverage of artworks, plus Jonathan Jones’s exhibition recommendations. Sponsored by the National Art Pass.

Find the latest jobs in your sector:

Ealing | Commensurate with experience. Base salary, plus OTE.

Benares tragedy: 'All I can remember were the screams and cries for help'

On 17 September 1940 a German U-boat sank the City of Benares. Eighty-one child evacuees died. On the eve of the 70th anniversary, some of the survivors talk about this forgotten tragedy

(4 pictures) First stills from The Lady

Send to a friend

U-571: You give historical films a bad name